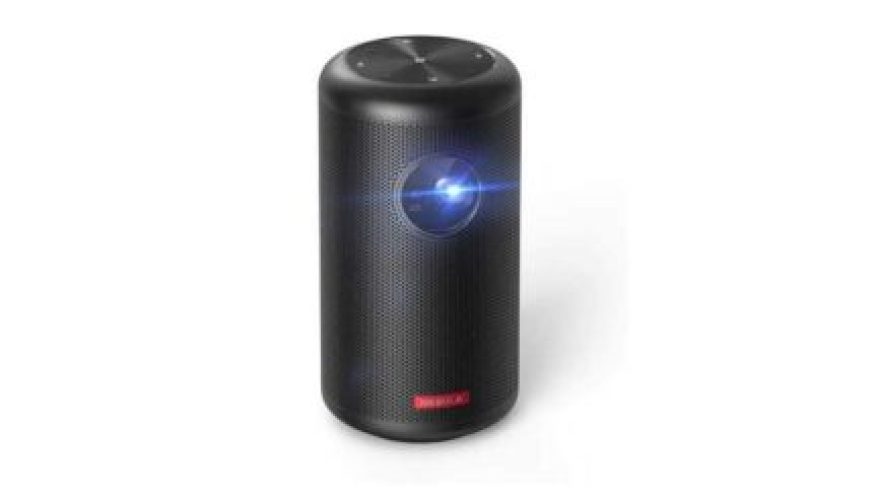 The Anker Nebula Capsule II costs £550 ($530). If you’re happy to drop down to a mobile OS in the shape of Android 8.1, then the Nebula Capsule Max offers some savings at £480 ($420) while keeping many of the same key specifications

The new Nebula Capsule II projector is a portable can-shaped mini projector. Measuring 3.15 x 3.15 x 5.9 inches, it’s all black with wraparound speaker grilles, except for a handful of buttons and a small red Anker logo on the front. Its projection lens sits recessed in a small circular porthole around the front. Weighing less than a kilo at 680g, it’s not much bigger than a can of coke, and has everything it needs to get movies and video beamed onto your wall, built in.

There are four sockets of note on the rear: an HDMI 1.4 input, a USB type A for flash drives, a USB-C for charging and a 3.5mm headphone-out. There are some control buttons on the top and one for power on the rear, but the small voice-operated remote control will be your main interface.

There’s an included remote control, so you can use this projector like you would any smart TV. In fact, it comes with the Google Assistant built in, so you can speak into the remote for searches. If you take nothing else away from this review, remember this: it’s a portable projector that’s nearly as easy to use as your smart TV, and that’s wonderful.

On the top of the chassis is a four-way controller, as well as plus and minus volume-control buttons and a backspace button. On the rear, in the center, you’ll find the power button, as well as a second button that lets you switch between projection and speaker modes.

As with most portable projectors, it’s a fixed lens device, so no zooming in and out. It has a 1.3:1 throw ratio and can create a picture between 20-100 inches. Anker recommends a projection distance of between 40-80 inches for best results and that means an on-screen image of 36-71 inches.

It provides 720p (1,280-by-720-pixel) native resolution at a 16:9 aspect ratio suitable for widescreen video. Anker rates the brightness at 200 lumens, which is modest for a palmtop-size mini-projector.

The projector has a native aspect ratio of 720p, although it will accept signals up to 1080p. When an image is projected, there’s a gray border around it that can be distracting in a dark room. At a 40-inch diagonal that border is about 0.75-inches wide and will get wider the larger the image gets.

It boasts a one-second autofocus feature, which, though it takes more than one second, is easy to manually adjust if needed. There’s no auto-keystone feature and no horizontal movement of the picture at all. You can still adjust the vertical plane, but it’s not the best system. Fortunately, the device is so small and easy to prop up that setting it up to project straight on in the first place is rarely much of a problem.

For a small projector the speaker works well and can play at a loud volume and is free of distortion. Bass response is decent for the speaker size, but if you want something more I’d recommend plugging into an external speaker with the 3.5mm out or using headphones. Connecting through the 3.5mm port disables the internal speaker. The Capsule II can be used as a standalone Bluetooth speaker for playing music from your smartphone.

As long as you’re in range of a wireless network, the likes of Twitch, Hulu, Plex, YouTube, Tidal, Spotify, BT Sport and Amazon Prime Video are all on the menu. Chromecast will stream most other apps, including All 4, BBC iPlayer, Rakuten and Now, but it’s not possible to cast either Netflix or Apple TV.

It will support Chromecast from several apps if you have the video saved locally on your phone. The device itself has very little local storage, and Android TV apps aren’t designed for downloaded content anyway. You can also play video via other means, including sideloaded apps that aren’t available in the Google Play Store for Android TV or directly from video files saved on a USB thumb drive.

Starting with a full charge, I streamed an HD YouTube video for two hours and 51 minutes before the projector flashed up a low battery message and shut down. The power light started flashing red about half an hour beforehand as a warning.

You can apparently expect up to 30 hours of music playback over Bluetooth, so while it makes for a very expensive portable speaker, it’s at least a long-lasting one. I didn’t fully test that claim, but had no problems streaming a Spotify playlist for several hours in the sun one lazy Sunday afternoon.

Anker’s way is to install the smartphone app controller app, then send you through a series of convoluted steps to sideload Netflix on the device directly. If you were hoping to just use Cast for Netflix, sorry, that doesn’t work either — nor does Airplay from Apple devices. From now on, you can only run Netflix by hitting the button in the smartphone app. It all works, technically, but it’s an awful experience. It’s pretty rough to ask users to install a literal file browser app, and it’s just as rough to have to use a button on the phone to launch Netflix.

Based on my testing, video quality is fine for showing clips and even full-length movies, provided you’re in a fairly dark room. I occasionally saw rainbow artifacts—little red/green/blue streaks—in bright areas against dark backgrounds. But they were mild enough that they wouldn’t likely be distracting, even to someone sensitive to these so-called “rainbow effects.” Color balance was good, with the only issue a hint of blue in some white-dominant images.

The Epson EF-12 is an excellent portable projector that has plenty of features to make it an attractive proposition. It has some of the drawbacks that beset most of the best portable projectors such as a lack of zoom controls, and limited app availability, but more than enough advantages to make up for them – not least two excellent built-in 5W Yamaha speakers and a great built-in Android OS which gives this the functionality of a smart TV with easy streaming. The three-chip LCD processing gives great depth of colour and no rainbow effects, while the strong laser light means that it’s more than watchable with ambient light in the room.

The native 1080p picture (also supports UHD images) looks sharp with instant autofocus and kearning to give quality display wherever you set it up. It gives wonderfully clear images up to 150 inches, a huge picture from such a small projector. The over 100ms input lag is an issue though and is a real drawback for gaming, though. For some people, this will fall in the gap between a dedicated home projector and a truly portable unit, especially due to its lack of battery. But if you’re looking for a great unit for every day watching at home which you can also take out to easily set up in other places, this fulfills that niche wonderfully.

Like the LG above and the other Nebula below, the Mars 2 is a smartbox style portable projector which offers both convenience and a good dollop of fun. It’s an excellent pick up and put down mini-movie night in which ever room in the house you happen to be.

It offers a picture size of up to 150in (you’ll need very low lighting to appreciate it) and it’ll run for four hours on its internal battery before it needs plugging in again – not bad for a summer evening’s outdoor cinema, then. It also has a 2 x 10W speaker system built in.

Obviously, it’s not the last word in picture quality but it delivers enough of the goods to be worth your while.