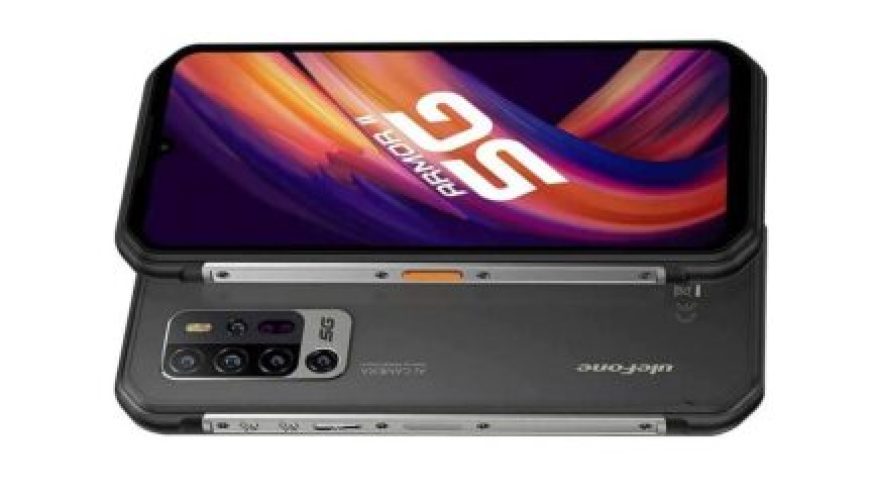 At $579, the Ulefone Armor 11 sits at the higher end when it comes to rugged Android devices. The device ships in only one option: 8GB of RAM with 256GB of storage, and there is no option to expand storage via a microSD card. It also only comes in black.  There’s also a 15W Qi Wireless charger (RRP $40) and a multifunctional protective case ($30) for those who want to accessorize the device.

The body is made of plastic and rubber with aluminum ridges, but they are very light and almost plastic-like. Ulefone confirmed that the display does not feature Gorilla Glass.

It looks tidier and the overall product is marginally smaller than its predecessors at 164 x 82 x 14mm for a weight of just under 300g. Operating system aside, the Armor 11 features a single uncovered USB-C port, a SIM card tray on the bottom of the device, and a single firing speaker on the back. Keep in mind there is no 3.5mm headphone jack present on this phone; however, Ulefone does include a 3.5mm to USB-C dongle in the box. Lastly, the Armor 11 features a side-mounted fingerprint sensor and a smart key on opposite sides.

A bright orange textured button – which can be customized – is located on the left edge while two volume buttons, the power button and a fingerprint reader are found on the opposite side.

The front of the smartphone has a centrally-located teardrop camera notch under an oleophobic screen; the 6.1-inch display is covered by a Gorilla Glass 5 layer. The octagonal shape of the Ulefone Armor 11 will protect the display corners, the more fragile part of the component, better.

The Armor 11T is a hybrid of its two predecessors, the Armor 10 and the Armor 9. From the former, it borrows the processor (MediaTek Dimensity 800), the memory (8GB LPDDR4X), the storage (256GB UFS 2.1), a 2-megapixel depth sensor, a 5-megapixel macro lens and the 16-megapixel front facing camera. From the latter, the FLIR Lepton thermal sensor.

The rear side contains five camera sensors, two of which are dedicated to thermal imaging camera unit, and are found next to a flash LED on a protruded area, probably not the best idea if you want to avoid scratches on a rugged smartphone. Ulefone’s logo and a “powered by Flir” inscription can also be found on the back.

However, you can only record videos up to 4K without gyro-EIS image stabilization, and downgrading to 1080p is also possible. Features such as professional mode, AI beauty mode, portrait, and HDR modes will be available at your service. The colors in the image will not be very vivid or contain contrast like other mid-range smartphones.

Considering that the leadership of the primary camera configuration is maintained by the 48 MP lens, there is also an ultrawide 13 MP sensor that can take 125-degree photos, 2 MP macro, and 2 MP depth in the secondary camera unit. As for the front camera, the 16 MP waterdrop notch offers exceptional results with medium details. Image processing is not bad either indoors or outdoors as well as at the night.

The Armor 11 touts a rugged design, with an IP68/IP69K water and dust resistance rating (the latter a step above the more traditional IP68 rating and the highest given to a device). It specifically protects against close-range pressure and high temperatures.

Also, the “watertight” SIM card slot is a little too easy to pull out with one’s finger. On other rugged devices, the SIM card slot is almost impossible to pull open without a plastic pry tool. Again, the USB-C port does not have an on-device rubber covering, which means the water seal is in the actual port. Ulefone does include some watertight seals in the box

I don’t have an exact metric for this, but the phone lost about 1% every few hours in my testing. As a result, the phone would last through the night with only about a 3% drain on the battery.

Battery performance is another strength for the Armor 11. In my testing, I averaged about eight to nine hours of screen-on time. The 5,200mAh battery easily lasts two full days. In fact, I was pleasantly surprised by the outstanding standby time of this device.

Ulefone’s FLIR maverick shares the Mediatek software roster with its rivals. There’s the useful Easy Launcher/Child Mode user interface that restricts/simplifies the features of the smartphone. Also part of the kit is the ubiquitous Toolbag which includes single-use apps that, in theory, should appeal to DIYers and outdoor enthusiasts.